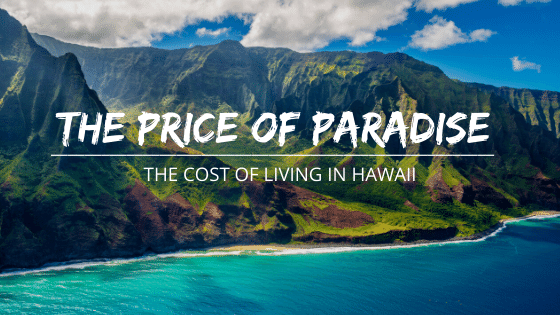 There are few places in the world that share quite the same brand recognition as Hawaii does except for maybe New York City, London, Paris, Los Angeles, and other iconic destinations made popular by historic culture or Hollywood. I think it's safe to argue that if "Name The Top Vacation Destinations" or "Name A Place You Would Live if Money Were No Object" were Family Feud questions, "Hawaii" would roll off the tongue most frequently. That being said, it's no secret why Honolulu is often ranked in the Top 3 Most Expensive Cities in the U.S. According to a study by the Missouri Economic Research and Information Center in 2019, Hawaii has the highest cost of living in the nation with an index of 191.8. The national average index was set at 100 and Hawaii absolutely crushed it with the closest 2nd being the District of Columbia at an index of 159.

Hawaii is a trophy destination, a never-in-a-lifetime or once-in-a-lifetime experience for too many. Some calculations suggest that the average Hawaii trip cost per person is roughly $1,899 a week for fun in the sun. Idyllic white sand beaches, mountainous backdrops, and the crystal blue Pacific Ocean are things of post cards and hard for some to imagine as every day lifestyles. Trust me when I say I wouldn't trade it for the world, but that doesn't mean there aren't concessions to be made.

So if you have ever wondered, "what is the cost of living in Hawaii?" allow me to break it down for you but from the perspective of a Missouri-born Hawaii transplant. I've run the spectrum of being born and raised in the 3rd cheapest state in the nation to starting a life, family, career, and real estate estate investment portfolio in one of the most expensive. I'll cover the dollars and cents on the topic but to close it out, I think it's responsible to shine light on the intangibles; the true costs of living in Hawaii and how it sees some local families brought together, or if you're family is like mine, how it pulls some apart.

How much does it cost to live in Hawaii

Studies have the cost of living in Honolulu requires residents to have an income of $120,000+ are required to live comfortably in the state's capital. This is subjective of course, but according the U.S. Census, Honolulu's median household income was around $80,000 in 2019. Subjective or not, that's a pretty wide delta and it shows that many Honolulu residents aren't living very comfortably. According to a study by Payscale.com, the cost of living in Honolulu, Hawaii is 88% higher than the national average with housing clocking in at 202% higher than the national average.

What is considered low income in Hawaii?

In 2020 the U.S. Department of Housing and Urban Development (HUD) concluded that "low income" for an individual living on Oahu is considered $93,000. That's a staggering considering it's nearly double the national average income of a full time salary earner is around $48,672.

What is state income tax for Hawaii?

Compared to the national average, Hawaii's top income tax rate of 11% is high but the state also has the lowest effective property tax rate of just .27% annually. There is no literal state sales tax but businesses must may a 4% general excise tax on all business activities, plus an 0.5% override for Honolulu County. Below are the Hawaii income tax brackets for Single Filers and Married Filing Jointly. Click here For Married, Filing Separately and Head of Household. 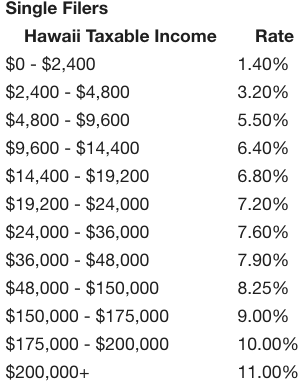 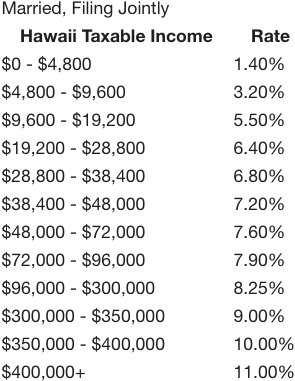 Using the above scenario of a "low income" earner of $93,000 -- we'll compute their net wages using federal tax rate of 22% and the Hawaii income tax rate of 8.25% per the chart. The individual's net wages, after taxes, pencil out to $64,635 annually which equates to $5,386/mo for housing and everyday expense. Let's take a look at some of the every day expenses one can expect and see how the individual budgets out.

Here's the average rent to expect for apartments in Honolulu and/or single family home rents:

These are mere average ranges and these numbers can fluctuate significantly depending on the presence of ocean views or proximity to the ocean. Here's the top 10 most expensive apartments for rent in Honolulu to give you some context.

The Big Island of Hawaii sees substantially lower rent prices than Honolulu rentals and this is again attributed to the amount of commerce, jobs, and proximity to jobs. Hawaii Island is much slower and much less dense in population and job opportunities which in turn sees less demand for rentals and homes for sale, hence the lower prices.

Buying a Home in Hawaii

Referencing the graphic above you'll see that Hawaii's staggering median home prices that saw heights of around $835,000 in 2019 for single family homes and $400,000 for Honolulu condos for sale. Despite the lack of affordability, the Oahu housing shortage is intense and as a result, residential developers have been flocking to the island to capitalize on the demand. Neighborhoods like Kakaako and Ala Moana have seen developer erecting New Honolulu Condos for the lasts 6-7 years.

Developers are also entrenched in the West Oahu neighborhoods of Hoopili and Koa ridge that will see nearly 15,000 new homes in Oahu over the next 15 years. Rumors of a development named Makaiwa Hills in Makakilo may add another few hundred as well.

How Much is Gas in Hawaii?

Gas prices in Hawaii largely depend on what island you're living on. The island of Hawaii gas prices hover around $3.25/gallon in 2020 with the average gas prices in Honolulu, Hawaii near $3.00/gallon.

You'll be hard pressed to find a wider variety of groceries anywhere in the world compared to Hawaii. Considering our geography of being halfway between the U.S. and Asia, as well as the tropical fruits native to the islands, Hawaii's food choices are abundant. Our geographical location also puts a steep price on groceries due to the costs of shipping them here. The aforementioned study done by the Missouri Economic Research and Information Center concluded that Hawaii groceries ranked 164.6 compared to the national index of 100. The closest 2nd was California at 119.3.

Often times we hear visitors gasp at the Hawaii price of milk that can reach heights of $8.99. If you live here, obtaining a Costco membership is imperative so you can buy in bulk to scale your costs down.

The Local Perspective | How to make it

With the right perspective, days off from work as a Hawaii can feel like the vacation of dreams but we're still human and and it's easy to lose that perspective while being subjected to some of highest home prices in the nation, and some of the worst traffic in the nation(if you're on Oahu). I tell all of my clients, both locally and from abroad that maintaining a comfortable lifestyle in Hawaii requires intention, and lot of it. Applying intention to every dollar spent, every financial decision made, and every job you apply for is going to go a long way in determining if you can continue to comfortably live here, or if you will inevitably be "priced out of paradise."

I even goes as far as to suggest that people be extra intentional about their relationships; the words they say and the way they resolve conflict with their other halves. Sure I want people to have healthy relationships but if that's not incentive enough, then you should know that it's just good business in Hawaii. Your boss will never give you bigger promotion or demotion than what you can give yourself by securing or destroying a healthy relationship with another income earner. Aside from the benefits of companionship, raising a family, and stability, the term "it's cheaper to keep her"(and vice versa) has never rang more true while living anywhere else in the United States. Two income earners working towards a common goal is a surefire way to "level up" your financial situation while living in Hawaii. If you're hoping to make it on your own here, make room in your pantry for ramen noodles and rice! 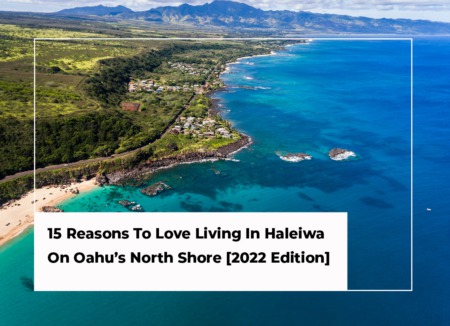 Oahu’s North Shore is an experience you’ll never forget. From Kahuku Point to Kaena Point, the coastline is the selling feature for the ...Read More

If you’ve ever traveled to Hawaii, you know it’s an incredible and unforgettable place. It’s one of those places that you visit, ...Read More 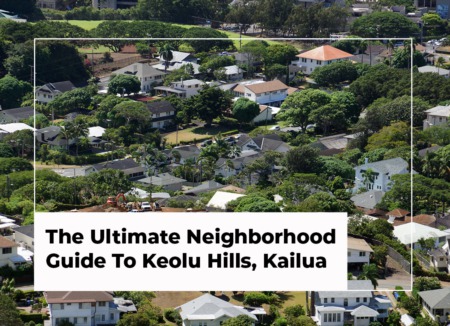