Oahu is home to many "Valley" neighborhoods but none quite as esteemed as Manoa. It exhibits cool, tranquill, small town vibes without a mountainous backdrop, yet so close to all of the stimulation in "big town" Honolulu. It's a place where iconic mom and pop shops and local businesses thrive with patronage from University of Hawaii students and residents both in and out of the Manoa community.

Minutes from UH Manoa, Punahou School, and premier access to all of Honolulu's best restaurants, shopping, and entertain without having the jump onto the dreaded H-1 freeway. and you rarely need to have to jump onto the H-1 freeway which is all the dread of living in Hawaii. 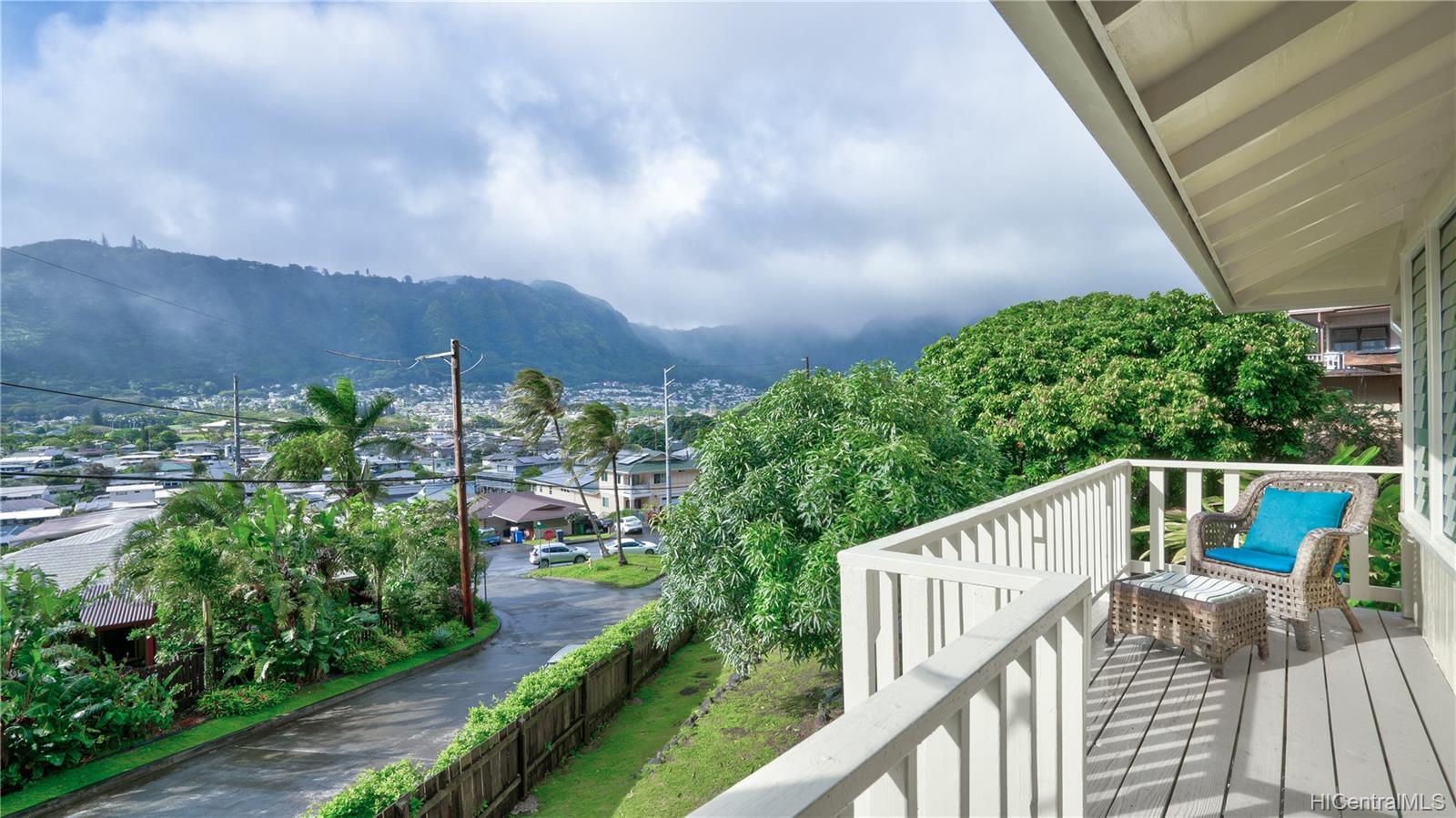 With 150 inches of annual rainfall, Manoa is very luch and tranquil but not absent of breezy island tradewinds. If you like cooler weather but don't want to have to commute to higher elevations outside of the Honolulu area then Manoa is the place for you.

What is Manoa Valley best known for?

University of Hawaii at Manoa

Yes, UH Manoa is located in the neighborhood but this isn't the stereotypical college town that you're used to on the mainland. It's very laid back, things close down early, but since we have no professional sports teams in Hawaii, Univesity of Hawaii Athletics is all the pride and joy of our island home.

Punahou is one of the most notable private schools in Oahu, also the most expensive, and the alma mater to President Barack Obama, the founders of AOL, Ebay, and prominent local business men and women.

Beyond these two campuses, Manoa is generally regarded for having high level educational opportunities at other schools as well. These would include but aren't limited to Mid Pacific Institute, UH Lab, with St. Louis and Sacred Hearts not to far away.

What is there to do in Manoa?

Brush up on Hawaii History at the Manoa Heritage Center or strap up your boots and hit the Pu'u Pia, Aihualama, or Manoa Falls Trail! Learn more about our top picks for activities, recreation, and hiking in our Things To Do in Manoa post below! 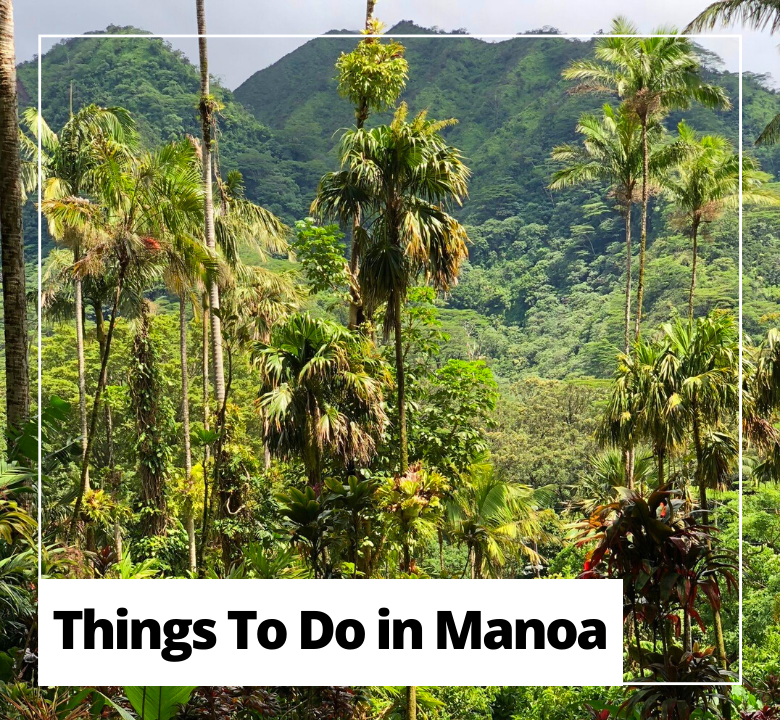 Are there good Restaurants in Manoa?

We start at Morning Glass Coffee to get your morning buzz and breakfast. Lunch is definitely reserved for local favorites like Andy's Sandwich Shop, Off The Hook Manoa Poke, & Waioli Tea House. Learn more via our Manoa Restaurants Guide below 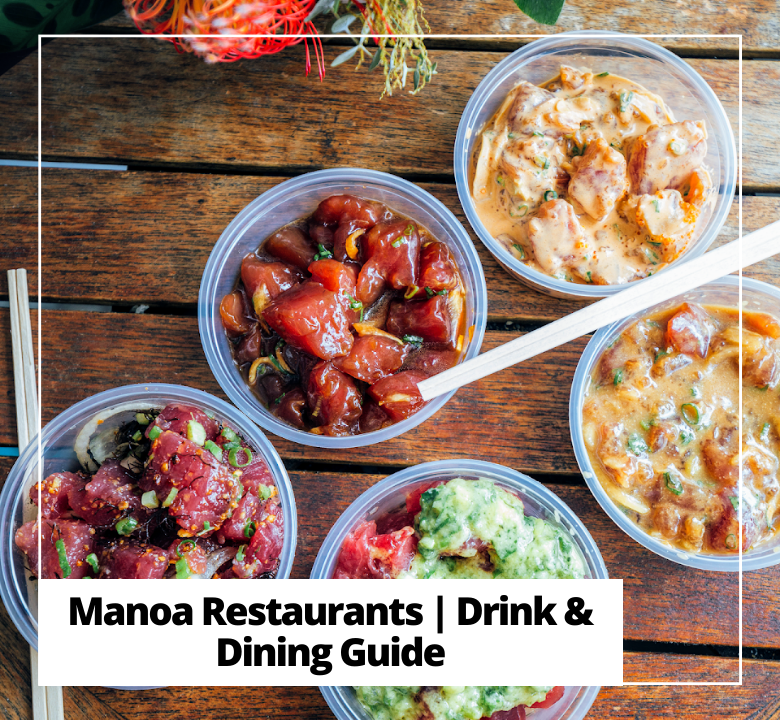 What are the closest beaches to Manoa?

Ala Moana Beach and Waikiki Beach are going to be your go-to spots for surf and sand. They're only a few miles away, but stoplights will put your commute around 15 minutes.

Where can I shop in Manoa?

The Manoa Safeway and Longs Stores will provide you most all of your grocery, pharmacy, and every day needs but if you're looking for retail therapy, you're only a short drive from world class shopping at Ala Moana Center, South Shore Market, and SALT at Kakaako. 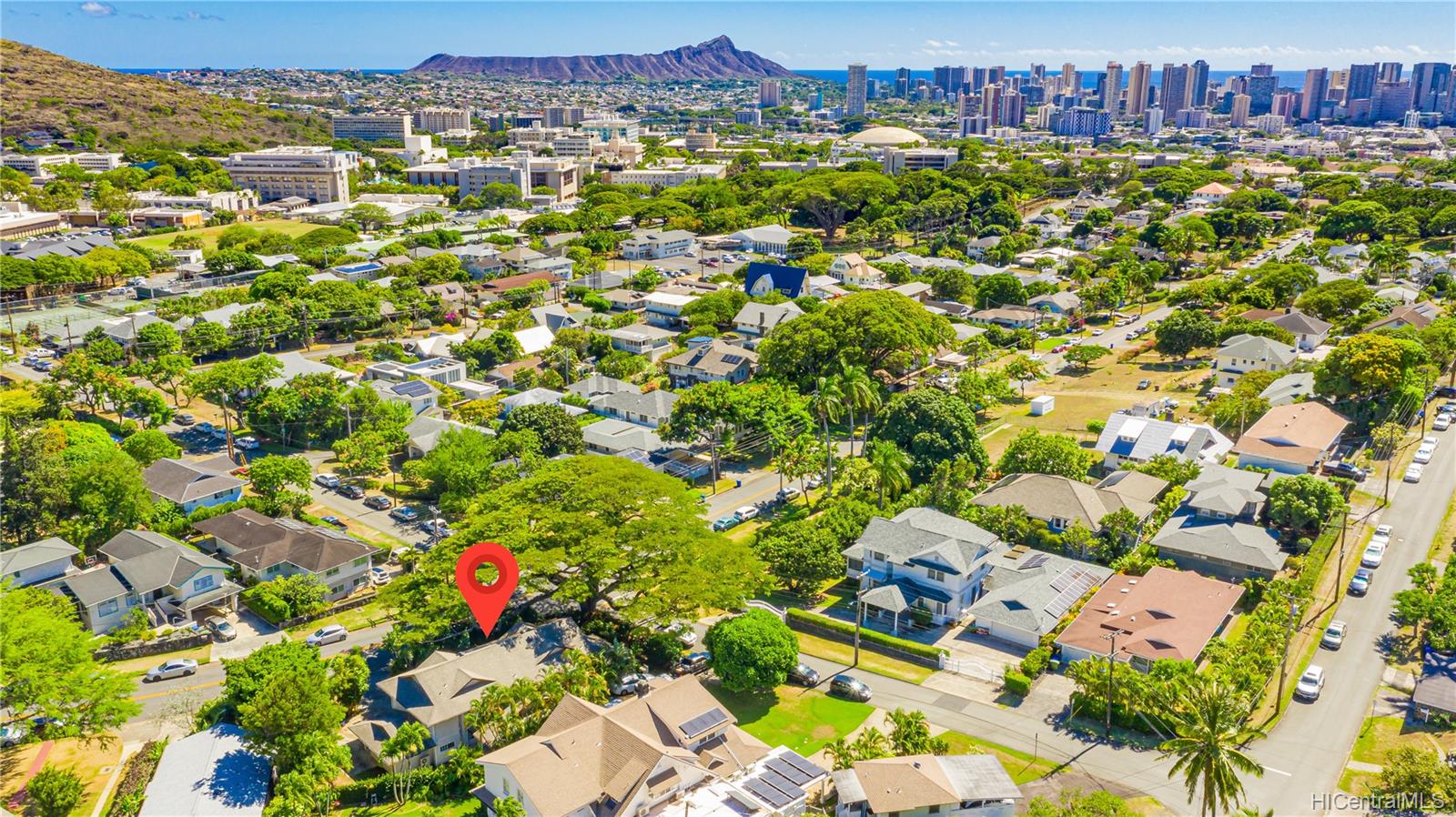 Manoa has historically been viewed as one of the more affluent neighborhoods on Oahu, it once even rivaled Kahala. If you're exploring Manoa homes for sale, you'll find most homes to be of the older variety but not without vintage charm. The community breaks down into  the 4 micro-neighborhoods; Lower Manoa, Upper Manoa, Manoa Woodlawn, & Manoa Area. All of which are detailed on the Manoa Map below. 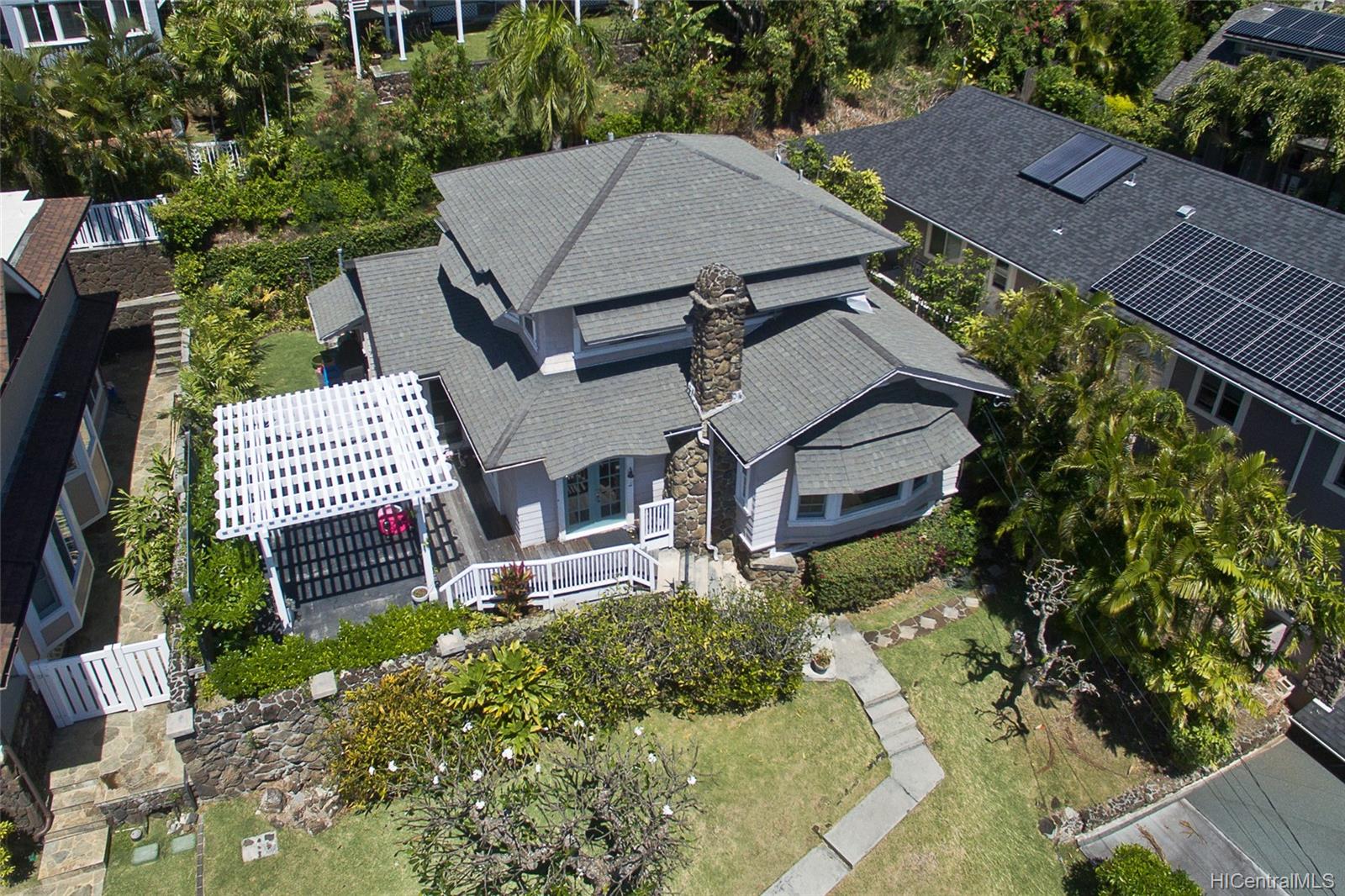 Average lot sized in Manoa are approximately 11,500sq which in Oahu standards, is large.  Some of the streets can get kind of narrow due to the larger lot sizes. Majority of lots will be flat and very usable or just gently sloped but homes on the edges of the valley willl see some elevation, steeper slopes, but with ocean and city views and a result.

Sidewalks in Manoa will be hit or miss and so will underground electricity. Both of these features are determined on a street by street basis.

Types of Homes For Sale in Manoa 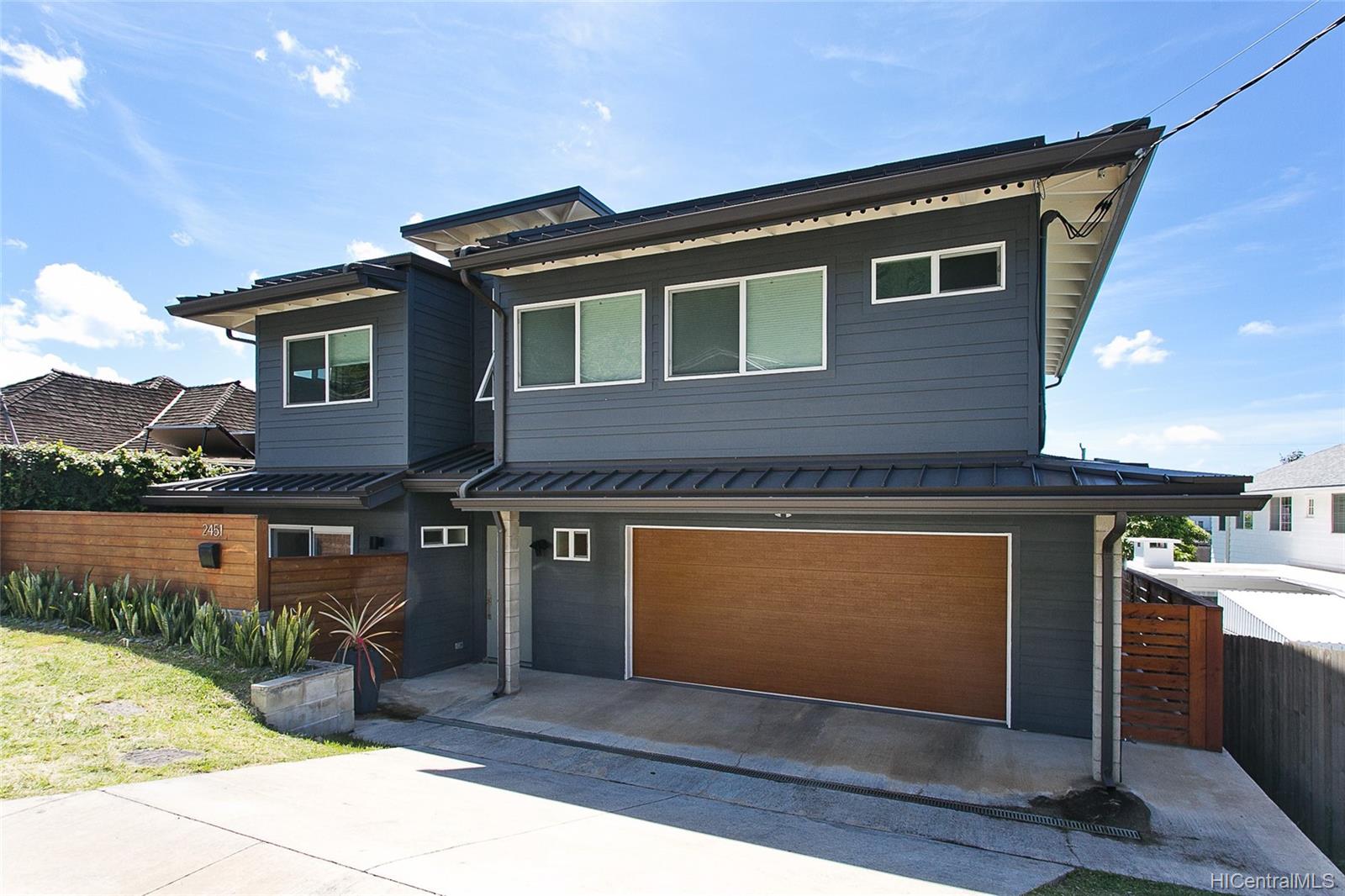 You'll see a mixed batch of single story and two story options, and you'll want to get comfortable with single wall construction unless you can hold out for one of the limited, more modern builds. The neighborhood is also known for having the highest concentration of Hawaii Historic Homes for sale which could see you pay only hundreds of dollars per year in Honolulu Hawaii Property Taxes intead of thousands. The caveat being that you must maintain certain aspects of the home's historical aesthetic as well as opening it up for tours every now and then. 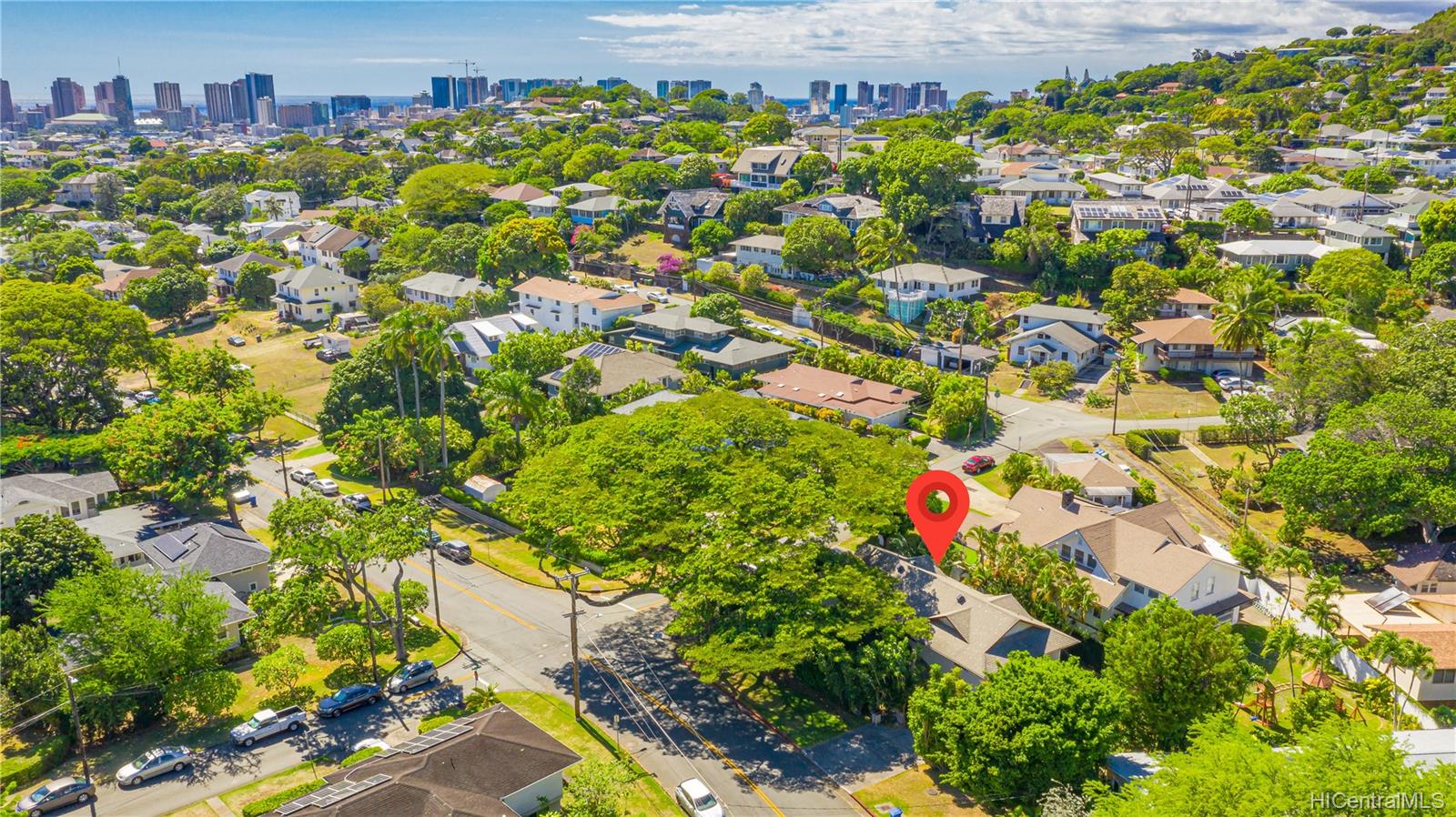 Condos in Manoa are very limited as the neighborhood is almost primarily single family homes. We only know of the (5) Manoa Condo buildings and you'll have to act fast when you see a new condo for sale in Manoa. They're a popular product for parents of UH or Punahou students looking to house their children, or even to use as second homes so they can be closer to their children going to school here.

If you're not seeing viable options for a condo in Manoa, don't be dismayed, just look to Punahou condos for sale or nearby Makiki -- the neighborhoods just below Manoa. These two neighborhoods will feature the most Honolulu condos for sale near UH and Punahou. Just beware that some of these will not have parking stalls; most likely anything under $300,000.

Manoa sits in a vast expanse of valley between Wa‘ahila Ridge to the east, and Pu‘u ‘Ōhi‘a to the west in the heart of Honolulu; just mauka (towards the uplands) of world famous Waikīkī Beach. Let us introduce you to lush, verdant Mānoa Valley. In the Hawaiian language, Mānoa literally translates to “vast.” Other translations also refer to the valley’s depth. Wide and vast indeed, Mānoa is embraced most picturesquely by the Ko‘olau mountains towards the back of the valley.

Keeping the valley cool are the stormy Kākea winds and the cooling Ala‘eli wind. Maintaining the
luxurious greeneries are the Tuahine, a cool and misty rain and the generous Wa‘ahila rain. Famed arethese wind and rain names in Hawaiian lore, but perhaps none are more famous than the ānuenue, or the rainbow of Mānoa.

She was the daughter of the Kahaukani wind and the Tuahine rain and was the
most beautiful woman to have ever lived. Her beauty was such that a rainbow followed her everywhere she went. Her name was Kahalaopuna. Her story is a tragic one, full of jealousy and deceit towards this beautiful woman. In a fit of misdirected rage, her betrothed killed her by feeding her to the sharks.

Sadly, her spiritual guardians could not help her, instead they turned her spirit into a beautiful rainbow. To this day, a rainbow can be seen in Mānoa Valley nearly every day of the year. A gift from the gods of rebirth and hope – Kahalaopuna radiates with the inner and outer beauty she possessed in life for all to sentimentally enjoy.

Mānoa was a valley of both chiefs and commoners. The chiefs resided on the western side of the valley, while the commoners to the east. The Mānoa Stream, snaking down through the valley was believed to be the dividing marker between the two sides. One of the most famous royal residents of Mānoa was Queen Ka‘ahumanu. Originally born at Hāna on the island of Maui, Ka‘ahumanu was the favorite wife of King Kamehameha I.

He had approximately 20 wives, marriages of strategy and the strengthening of allegiances. They produced no offspring, but prior to his death, King Kamehameha proclaimed Ka‘ahumanu would serve as Kuhina Nui, or premier at his son and heir’s side, King Kamehameha II. This appointment elevated her already lofty status and she became a major figure in the evolution of
Hawai‘i’s history.

In 1819 she aided in the abolishment of essentially the Hawaiian religion and welcomed Christianity in 1820, primarily for further political gain. With all due respect, one could say these decisions set Hawai‘i on a path of destabilization, forever changing this place. In 1829, at her
behest the 200+ acres of lands at Kapunahou, just at the bottom of Mānoa Valley before becoming what is known as Makiki were given from Chiefess Liliha to the Reverend Hiram Bingham. The site became what is known today as Punahou School whose notable alumni include:

Ka‘ahumanu’s influence was great regardless of how some remember her. She was of noblebirth, born into the most chiefly of lineages, and on June 5, 1832, she took her last breath at Puka‘ōma‘o, her Mānoa home. The Kahaukani wind could be heard sighing outside her door as she passed into the next realm, and a great sadness swept across the island kingdom. Further to Ka‘ahumanu’s Protestant influences is historic home in Mānoa Valley, Kūali‘i named after theancient O‘ahu king from Kailua on the windward side.

Built in 1912, it’s believed that Charles Montague Cooke, Jr. named his home after the early king as it was thought he worshipped at the heiau, or temple, Kūka‘ō‘ō, found on the grounds of the home. Allegedly, the ancient agricultural temple was built to honor the god of husbandry and those that worshipped there could hope for a bounteous harvest. C. M. Cook, Jr. was the descendant of missionaries that landed in the 8 th company to arrive in Hawai‘i in 1837 from Boston. Both the home and the temple are on the National Register of Historic Places. Check out the Mānoa Heritage Center for more information. 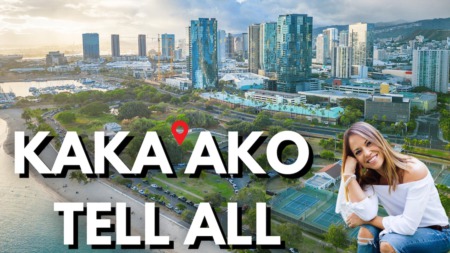 Community News
Why I Moved to Kakaako... And Why I Left!
BY Maila Gibson-Bandmann 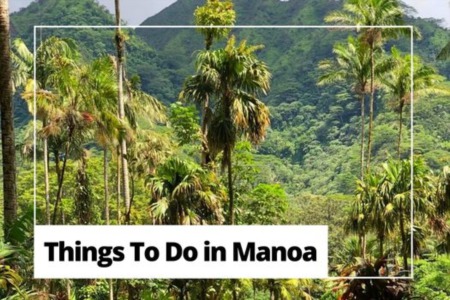 Community News
Things To Do in Manoa
BY Koa Cassady