The Howard Hughes Corp. will soon welcome Victoria Place to it's growing portfolio of luxury high-rise condos in Ward Village at Kakaako. Located between Victoria Ward Park and Waiea, the new Kakaako condo building will be situated on the coveted "front row" of the neighborhood at 1100 Ala Moana Blvd. Given the project's superior orientation on Ala Moana Blvd and with amenities comparable to Park Lane, we may see unit pricing around $2000 per square foot. 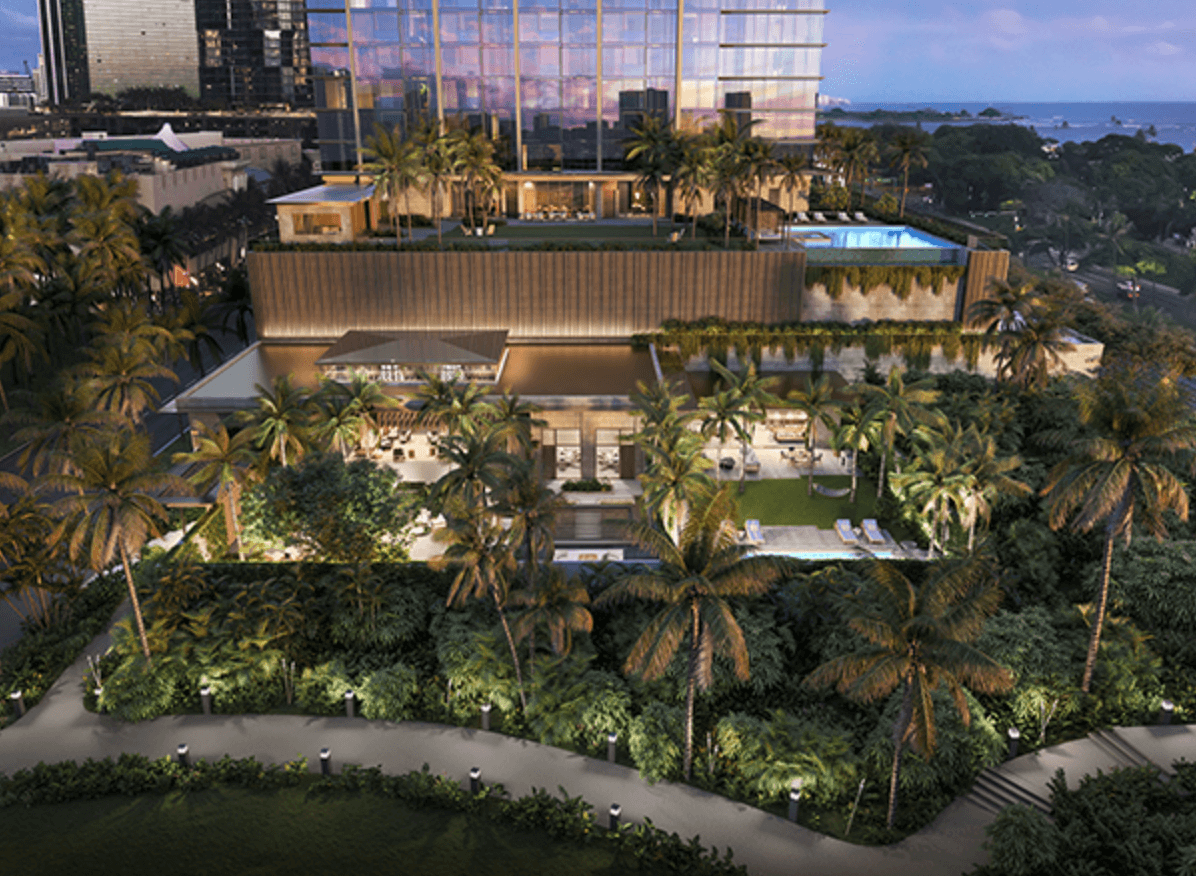 The location may ring bells for those familiar with the neighborhood, as this site was once home to the previously planned Gateway Towers that would have brought luxury condo buildings to the site. The consolidation of the previously planned building into one tower will allow the developer to expand the ocean side of Victoria Ward Park to promote further outdoor entertainment, wellness, and community gathering place within Ward Village.

Victoria Place will be drawn up by architects Solomon Cordwell Buenz whose talents are on display at Anaha in Ward Village, as well as Park Lane & One Ala Moana. Vita Planning and Landscape Architecture have been tapped for designing the project's immense grounds space and with the Big Island's Kukio project on their resume, we expect a similar level of sophistication.

Here's how the building breaks out:

The oversized ground level area is purposed towards seamlessly integrating Victoria Ward Park into the lifestyle at Victoria Place. Given the ample space, we fully expect the building to offer an impressive open lobby area, and contrary to previous Ward Village towers, Victoria Place will not offer ground level retail and commercial space. This lends itself to providing a higher level of exclusivity and amenities, similar to Park Lane Ala Moana.

This tower will mark Howard Hughes' 7th condo installment to Ward Village in Kakaako, which has recently found national and global acclaim as it was named the 2018 Master Community of the Year by the National Association of Home Builders. Ward Village has quickly become one of Honolulu's most exclusive neighborhoods by way of it's premier location, convenience, and urban appeal. The vision of Ward Village's matures tower by tower as the master plan now features numerous restaurants, Whole Foods, with much more to come. 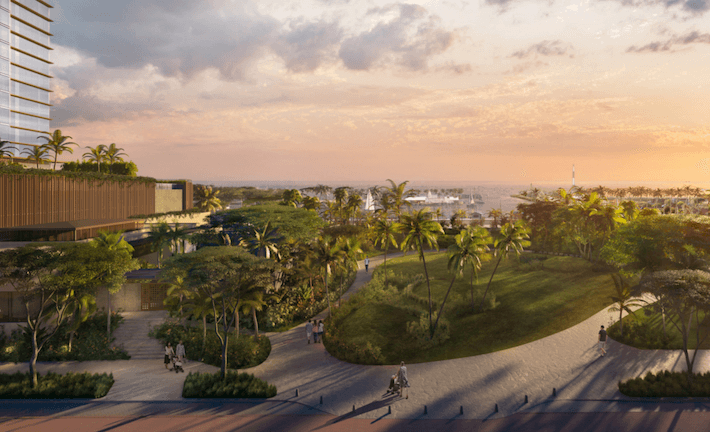 With Ala Moana Beach Park frontage, Victoria Ward owners are afforded one of the island's greatest natural amenities, a near playground in paradise. The nation's largest open air shopping mall at Ala Moana Center represent's the neighborhood's eastern border, with Downtown Honolulu at the western border.

These new luxury Honolulu apartments will feature well over an acre of recreation space, Victoria Place condos should feature the usual suspects of luxury, resort-styled amenities on par with previous Ward Village condo offerings. The developer took a thoughtful approach to the the building's amenities in that they created separation between what they consider "community" amenities from "recreational" amenities. 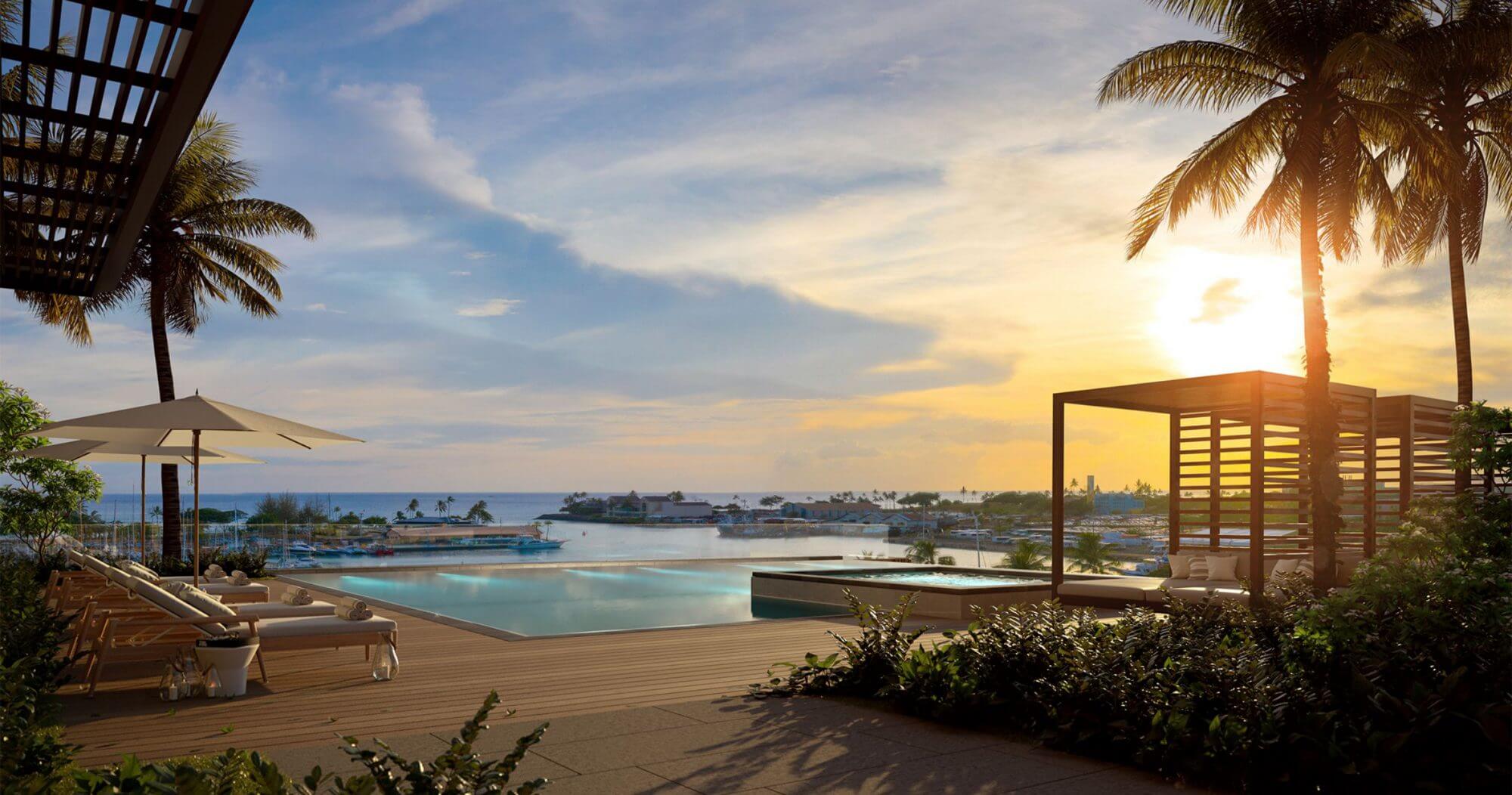 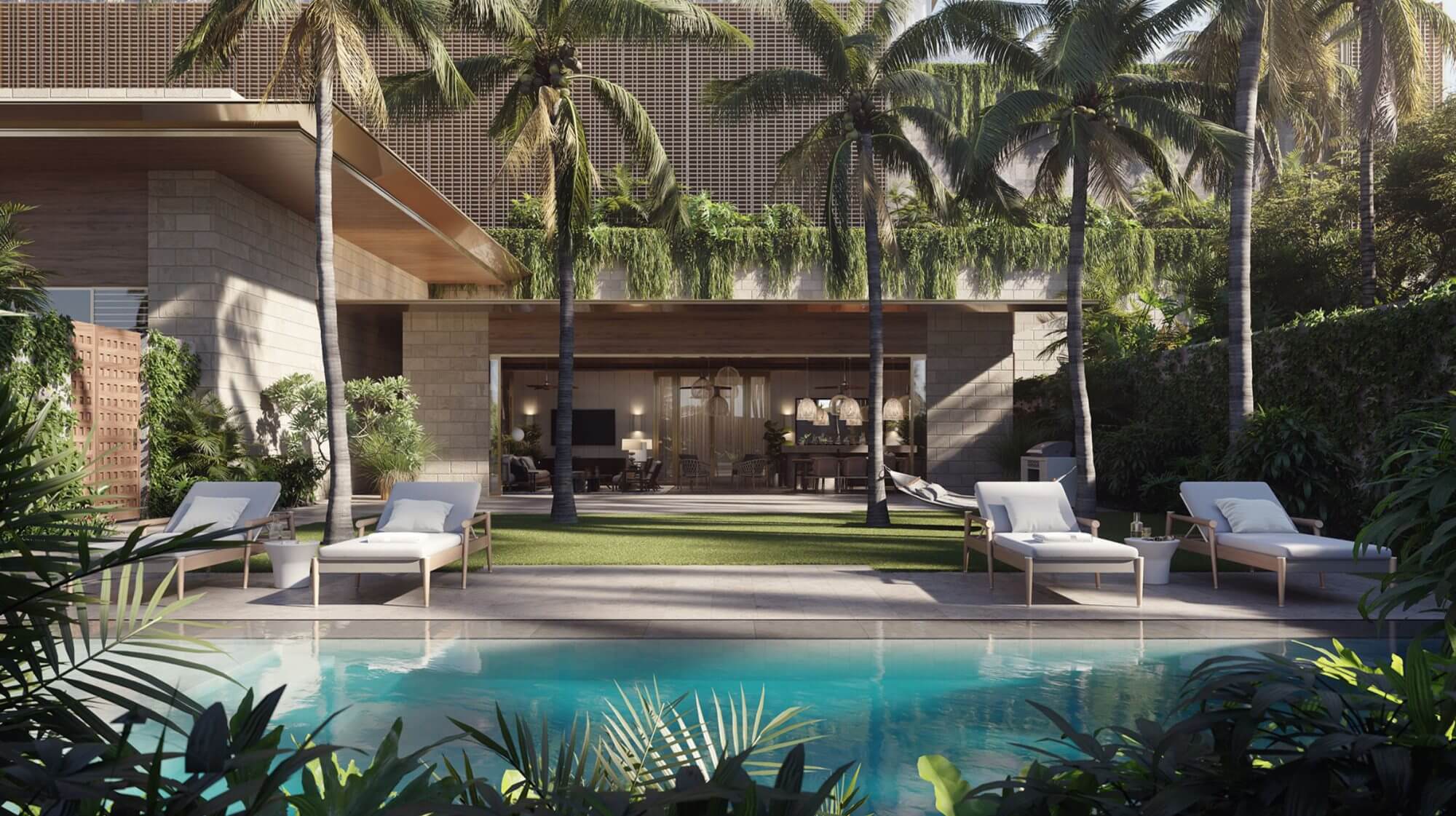 Looking at the rendering below, we'll see the great lawn, gathering spaces, and a recreational pool on the Ewa Side of the amenity deck at the "Sunset Lanai." Fitness related amenities like the lap pool, fitness center, and spa will be found on the Diamond Head side. One my favorite features of the deck will be the Pool House and Pool that can be reserved by owners to host guests for private parties and BBQ's. 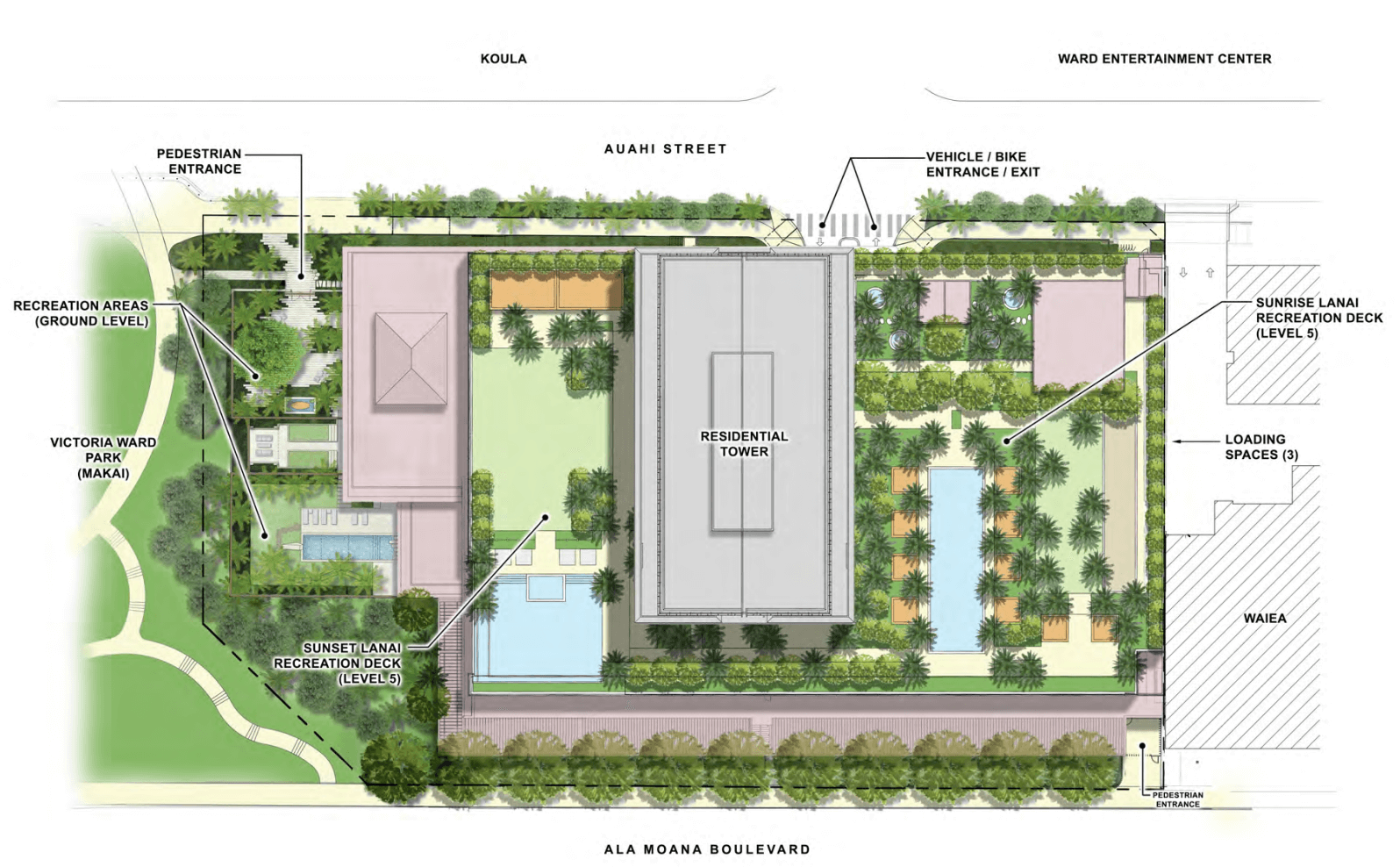 Official floor plans haven't been released yet but we should be looking at (10) units per floor with 9' ceiling heights with the top 3 floors offering 10' ceilings. Buyers will have the option between light or dark interior stylings in terms of floors and finishes and while the units won't feature lanais, we will see Juliette Balconies similar to One Ala Moana that allows owners to bring some of the outside in. 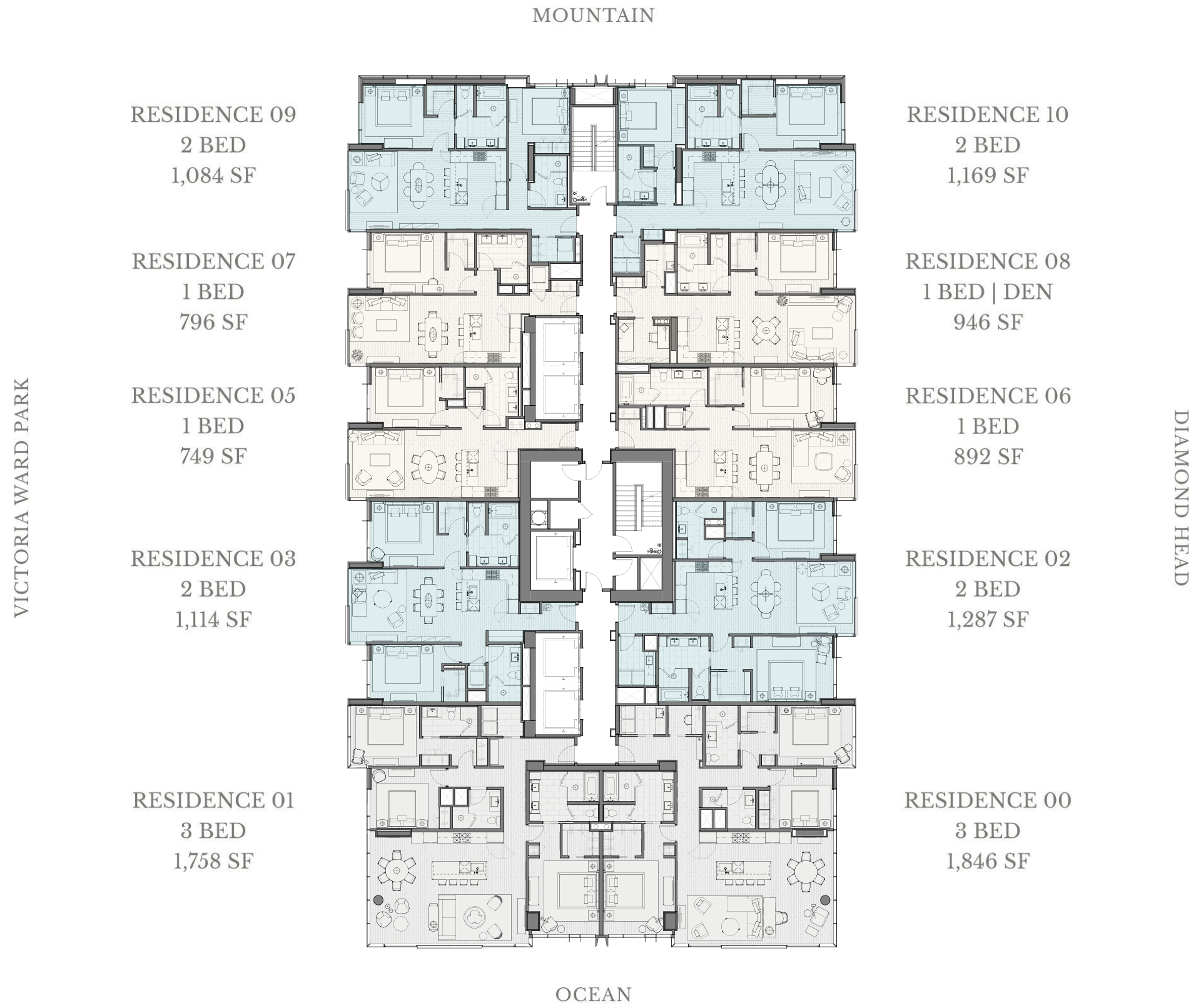 April 5, 2020: Construction on the tower has yet to begin but developer Howard Hughes Corp expects it will start late 2021 or early 2022.

Situated at 1100 Ala Moana with ocean and Diamond Head views, Victoria Place at Ward Village is ideally located adjacent to Victoria Ward Park and the ocean. The design c...

Situated at 1100 Ala Moana with ocean and Diamond Head views, Victoria Place at Ward Village is ideally located adjacent to Victoria Ward Park and the ocean. The design c... 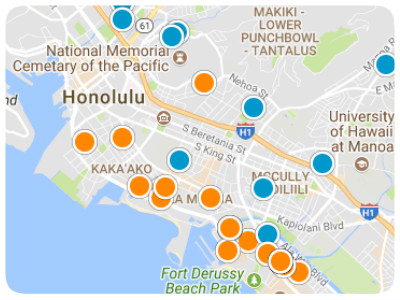